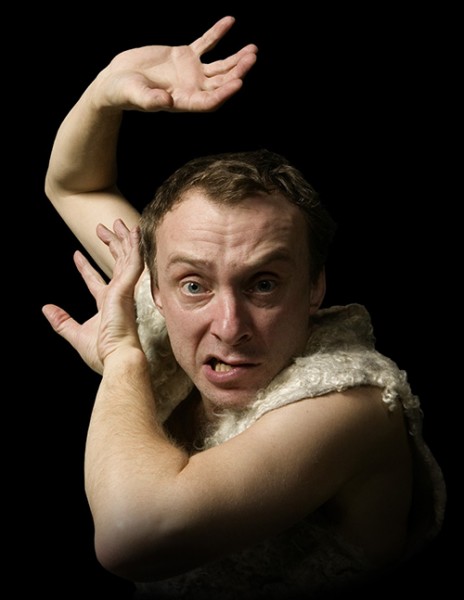 “If anyone deserves the title of Denmark’s God of Storytelling Theatre, then it is Jesper la Cour…
He hits the nail right on the head, as Thor himself could have put it. And it is hilarious!”
Read the review in full

“It sounds simple but the simple is often the most difficult og therefore the most excellent.”
Flensborg Avis.

“Right on the spot.”
Aarhus Stiftstidende.

Spectacular!
The secret zoom of the God of stories Jesper la Cour’s neo-classic Ye Gods is vibrant and full of life. In his universe children become fellow actors and the tale´s characters are carved into imaginary runestones, so a pair of eyelashes or a greasy head of hair flutter and flap throughout the show.

Can you perform the same show for 12 years running? Jesper la Cour can. He has no difficulties getting the actors and the production together, year after year, seeing how it is a one-man show, with him as the main character, storyteller, and any and all Gods capable of crawling and yelling and drinking in Valhalla.

And yes, even after 12 years running, you can still have your show reviewed… The fact is that Ye Gods is an immortal tale. It is a classical tale that can be performed and passed on to all from grade 3 who have yet to learn about the force of the Gods in Nordic mythology, the stupidity of the Giants, and the cunning of Loke. It is a solid and substantial present day interpretation of the Nordic Viking heritage. And as a pure neo classic tale, rising up against its own world of Gods, the storyteller´s ensnaring voice and brutal eyes paint threats and biceps the likes of which are only found in your imagination. The voluptuous Freja and the jealous Thor come to life before you – full of emotion.

Finger-licking good
If anyone deserves the title of Denmark’s God of Storytelling Theatre, then it is Jesper la Cour. Of course, he has created new performances since his 1999 creation Ye Gods His Beowulf from 2000 with Troels Kirk Ejsing and his Absalon from 2007, together with Ragnhild Kaasgaard, also take place in a historic context where children are presented with ancient world settings that suddenly become as easy to sense and associate with as their own present day.

All of Jesper la Cour’s characters are present and full of life. Part of the secret is his ability to zoom in on their weird little details—a beard, a limp, a stutter, or a compulsory sucking of fingers. With a single gesture or grimace, the character is imprinted in children’s imagination. Even as the story welcomes a myriad of new characters, each with their own distinct features, children are never in doubt as to who is who.

The stench of jaetter
What is it he does? He receives the children with exposed, trim biceps, wearing a skimpy lambskin coat designed with much hero’s humour by Charlotte Østergaard. He places the children in a close circle of accomplices around himself. Then he steadily opens the tale by welcoming all to a story from way back when Gods were all around. And they come crawling out from the shadows, the ugly Gods and the dodgy Giants – one of them has long greasy hair, and most of them never take baths. “They stink horribly,” as he says. The children look at him with pity and horror at the thought of him having to endure their smell.

Laughed to death
Jesper la Cour’s dialogue with children derives its beauty from the respect he shows them as his fellow actors. In pedagogical circles his approach to the children might be deemed “validation.” However it is much more than that – it at the same time creates a safe and cosy space and sets limits. And he has a sixth sense for picking up on it when someone doesn’t quite get it.

“What do you think that means?” he will ask spontaneously when he senses the insecurity – and then things are put in context. There is no need for rigid sticking to a script that goes over children’s’ heads – but nor is the approach about going after the lowest common denominator. He simply manages to get everyone on board. And he takes the children’s input seriously, responding within the frame of the story and without losing the narrative. He hits the nail right on the head, as Thor himself could have put it. And it is hilarious!

The core in Jesper la Cour´s art is his untamed sense of humour. He can create laughter out of everything. So when Freja´s flashing eyelashes send sparks of fury in every direction, the children are giggling. And when no adult in the audience can deliver an ear- piercing whistle despite his foot stomping demands, it is simply because they are rolling on the floor laughing. Even he himself has to fight to stop laughing along – but the sweat runs tellingly off him, making him look exactly like the exhausted man who has just finished building a wall around the world of the Gods in his tale. The only difference is that Jesper la Cour remembers to build a particular gate in the wall – a gate for children to come and go as they please, of course.